After 3 month of being locked in the lab, Red Sounds are back with a powerful tool – Vox Engine 2. First generation of Vox Engine was a real hit, but this time the bar raised to a new level. Vox Engine 2 is bigger, better and has more interesting and useful controls. Still, this Kontakt library is very simple to operate.

There are more than enough sounds to choose from.

Scroll throw 130 carefully shaped presets and you will definitely find gems for your next project.  But if this is not enough, make your own vocal chops and edit them easily with new Vox Engine 2 GUI.

All sounds used in this library are recorded and processed in Red Sounds studio, so they are 100% Royalty-free.

How this library was made:

Most of the vocals were recorded with 2 microphones to make them sound more 3D-mentional. (Of course, you can choose which mic you prefer by turning all the way to the right or left, or use both).

New 3D GUI with intuitive controls was made. 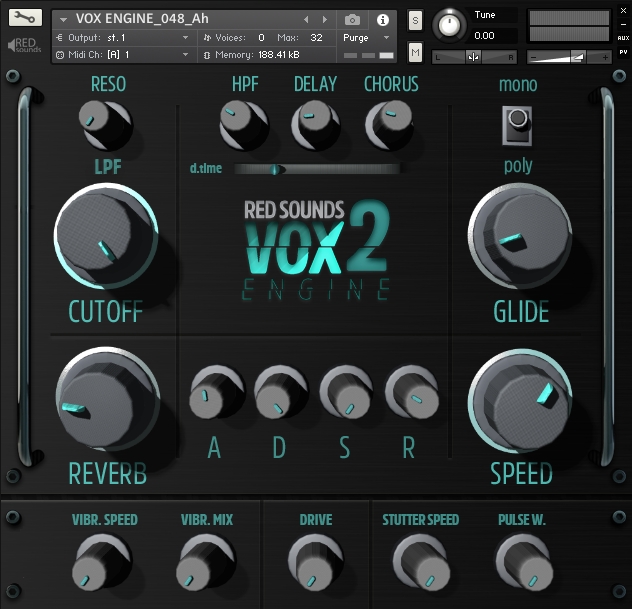 As a producer myself I used Vox Engine all the time so I realized what improvements could be made and what sounds first Vox Engine lacks.

So, these new features were added:

All controls and important info are included in the user manual.

Vox Engine 2 is fire. I love the sounds plus i just messed with importing my own sounds. I like that the speed of the sample is constant on all keys.

I like. It It’s exactly what you wanted to be.

Perfect for my music. I’m amator musician, I create different categorie of music, and I need voice instrument to humanise my song. Voice 2 is perfect for this and not expensive. It’s nice to compose various voice in my music.

Red Sounds VOX2 – great! Very easy to use with lots of useful presets!

You will find almost all sounds from the demo in this pack.

Vocal Chops are from Vox Engine 2, of course.

Synths are from Chianflume soundset.

Drums are from OVO Inspired Drums and Chainflume drum kit.

Only some 808’s and drums from Trap Serum pack are not included.

All of our products feature a 30 Day Money Back Guarantee, because we are confident in our sounds. But, if, you are not satisfied for any reason, you’ll be refunded.